The Oregon coast is stunning.  And I am having a ball:  bumping into (not literally!) the same cyclists, as we all travel down the same route and stay at the same $4-campsites.  On top of that, I am now staying with a lovely warm couple I first met in Alaska at the brother's homestead and who, in fact, has just arrived with family to stay for a few days!  Plus parents, whom I also met in Alaska.  Wow.  And it seems I am going to be passed on to yet more family as I continue down and across the States!  :-)

The coastal route the other day was possibly the most beautiful part to date:  from Newport to Florence.  And I could have so easily not taken that road because a couple of cyclists had suggested it was not a particularly interesting part of the route and taking an inland road would be prettier!  No, no, and thrice NO.  The 101 road took us past Cape Perpetua and Heceta Head and lighthouse and past an incredibly noisy sea lion colony way down on the rocks below.  The coastline is a mixture of spiky basalt rocks and/or fine white sand.

I forgot to mention before, but I had finally to replace my trousers with the patches, cos they could have become quite embarrassing, as they were tearing very easily.  And so, when I was in Seattle, I bought some new ones at the REI store there (I'd not heard of REI before Seattle;  but, then, I'd not heard of Billabong until a year ago!).  Likewise, I've also replaced my linen shorts, which had become fairly threadbare on the back legs, with a pair from a charity shop in Florence.

The route goes by a place called Tillamook, where there is a cheese factory.  I would not have stopped there if cycling Rachel had not sent me her west coast described route notes (in the post from Bristol, bless her), which included some of her own handwritten comments as she cycled along.  In this case, under the direction of Tillamook Cheese was written "ice cream".  The result of this was that I enjoyed the gastronomic pleasure of an obscenely huge 3-scoop ice cream in a waffle bowl, which energised me enough for the rest of the day without any more food.  [ice cream choices:  chocolate peanut butter  :-( wild huckleberry  :-)  vanilla bean  :-)]

I am dawdling.  It's taking me ages to  travel down,  some of it because there has been rain and so I don't travel as far; some of it because of meeting and talking with people or staying in people's homes for more than just a night.  Lovely.

Firstly, a message for Joy and Gary from Arroyo Grande!  :-)  During the recent horribly heavy rainstorms, your contact details were washed away and so I was wondering, if you happen to read this, if you would be kind enough to email  them to me.  I should be passing through Arroyo Grande within the next few days.  :-)
+   +   + 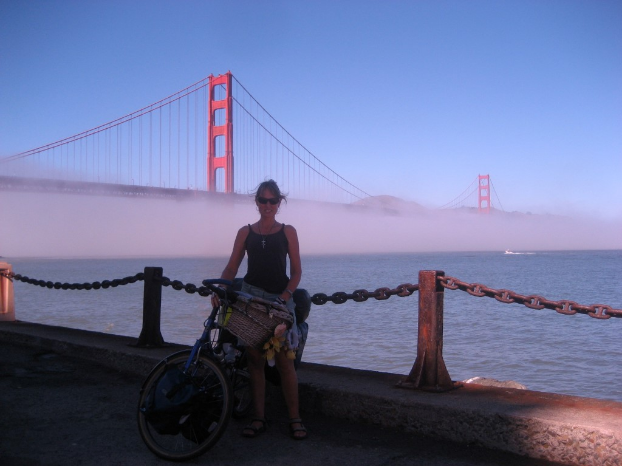 Having had only one day off within the last 16, I am appreciating a  wonderful rest here in Benecia (nnortheast across the bay from San Francisco) , staying with friends of one of the passengers from the freighter ship which brought me across the Pacific.  Thank you, Susanna, Mark and Charlotte.

Just before leaving Florence, I was interviewed by a local reporter and made the front page of the Suislaw News.  As a result of which I received a couple of emails from locals, wishing me all the best for the rest of my trip.  One of these, Steve Greene, is also on his own cycling trip, on a recumbent to and through Death Valley.

Cycling on down the Oregon coast continued to be enjoyable from the scenic point of view.  Crossing over the Californian state line elicited a big smile and welcome from the border officer.  The Californian coast has not been as spectacular as Oregon and there have been some pretty unpleasant motorists with attitude, sounding their horn too long and loud and passing me by with barely a hair's breadth of space!  What sad people they are.  Neither has the weather been too pleasant:  torrential rainstorm, thick fog, strong, heavy winds!  :-(  The result of this was uncomfortable nights in a damp sleeping bag and tent.  Yukky-do.

I have cycled with a couple of different people for a few days:  Vicky from Essex, Romaine from France.  I've also met and re-met the same cyclists on and off.  There's quite a clubby feeling as a result.

The highlights of the Californian bike route so far have been the 32 miles through the Avenue of the Giants and the 4-mile dedicated cycle route through  redwood and eucalyptus forests ( SO RELAXING to be away from the motorists, even for such a short time).

I have been mainly camping, but also stayed in a couple of youth hostels and in someone's parents' house by spontaneous invitation along the road;  and now, the weekend in a welcoming home across the bay from San Francisco.  The hiker-biker campsites are not as plentiful as in Oregon, are slightly more expensive ($5), have coin-fed showers (instead of free ones) and don't provide soap and towels or hand-dryer.

Arriving at the Golden Gate Bridge was pretty impressive, looking over to San Francisco and the bay with a few sailing ships floating under the bridge.

I had a choice of wine-tasting in the Napa Valley or climbing Mount Diablo in the confident expectation of encounters with tarantulas.  I whimped out with the first option.  :-)

I had a slow puncture, which was located easily enough and repaired, but then I could not re-connect the gear connectors and was becoming (no, let's be honest, became) upset and panicky that I wouldn't be able to rectify it and then I wouldn't be able to ride my bike!  But, then, as usual, something turns up, this time in the shape of Mark, an engineer and, therefore, someone with  objective thinking, who could work out how to resolve the 'problem'.  Oh, relief.  And I end up learning a little bit more about my bike.  Happy me.

The weather has picked up this weekend.  I hope it continues.  I work so much better on sunny, dry weather.

Well, here I am on the outskirts of LA in the Youth Hostel at Santa Monica.  Today I shall cycle along the bike route on the beach, past Venice beach (people keep mentioning I need to see it?!) and onwards to negotiate route 1 through LA.  The number of warnings I've had about the danger of the traffic along here is getting to me and so I am calling on my lovely band of traffic angels to help  me through unscathed.  :-)

Since  San Francisco the southern Californian coast  is much  more striking than the northern coast - and more pleasant terrain to cycle along.  I stayed with another contact in Santa Clara, 50 miles south of San Francisco.  This was the sister and her husband, Diane and Mike, of the brother, Doug,  and his family, with whom I had originally stayed in Alaska and had a reunion with another sister in Florence!!  They were great - of course.  I even had a small reception committee upon my arrival of a neighbour and her daughter.  I arrived a bit sodden, cos I'd got caught in a torrential outburst somewhere along the road.

The next day, I admit to accepting  a lift to Big Sur, via Monterey and Carmel (yep, even did the touristy thing  of taking a photo of the Eastwood building and his Boar's Breath Inn - not that I'd heard of it before then!).  Monterey is set very prettily on the coast and has quite an aquarium there, created by Hewlett and Packard.

The weather has changed, so that, once the morning mist has cleared, it is hot and sunny.  I even managed to  suffer from a bit of heatstroke one day.  I have been camping mostly, although I stayed with yet another contact in Arroyo Grande, Joy and Gary, who invited 2 couples around in the evening for dessert (apple cake and ice cream - yum) to meet me.  One couple in particular are keen cyclists and advised me as much as they could on a safe route through LA.

Again I accepted a lift a little way (to avoid going over a steep hill, The Macer) - am I becoming a softie?! - en route going past sand dunes under which are buried the buildings used in the epic The Ten Commandments.

I have met a few homeless people, either on the road or at  campsites.  The last one was a bit out of my comfort zone, I have to say, as he was  saying that he was from Atlantis, sent here by God to expose the evils of Satan through his music, which was subsequently blocked by the government who is now out to get him .......