Happy Easter! Christ is risen! He is risen indeed!  Alleluia!  :-)

Yes, I am still in Kathmandu!  It's 2 weeks now. Wow, what a break.  I have been house-sitting for a week, for a young Aussie family who have gone trekking in the Annapurna range and, as there have been a number of burglaries recently, house-sitting is just now being encouraged as a useful safeguard.  It's been great for me, too:  I have unlimited internet access, cos even when there is no power for 16 hours each day, there is a back-up invertor.  Therefore, not one to miss such an opportunity, I have been spending much of my time sorting and uploading.

It takes forever to do, but I enjoy it and am grateful to any hosts when offered the facility; it's not really practical in cyber cafes.;-</p><p>Talking of internet and, by implication, computers :-) , I had, and took, the opportunity to buy secondhand a small notebook .  In theory, the extra weight and storage will be justified by the time I can save by not having to spend it in internet cafes;  I'll be able to do offline work, as and where, and online work more comfortably in ordinary cafes.

Finally I have a departure date:  Tuesday 14 April.  Unfortunately, after false hopes of being able to cycle, I have had to book with a group travelling overland by jeep to Lhasa. :-(   :-(  However, although most of the 5 days the distance covered will be 200+ kms each day, there is one when only 90 kms is travelled (there is sightseeing in the morning).  I am hoping to persuade the guide that I can, in fact cycle that day, meeting them in the hotel in the evening.  In the meantime,  I am obliged to pack up my bike in carton packaging (as though I was going on a plane!) for transporting in the jeep!

I have been making bread and hot cross buns this week, finally producing something that I'd be happy to share.  I have been to church  a few times in the last couple of weeks and to a house group.  I was invited by a lovely Nepali couple living close by for a meal with them and their visiting family.

I shall stay in a hotel on Monday night in the centre of Kathmandu;  it is an early start (6am) on Tuesday and the tour company doesn't venture out to the sticks to pick up people.

Incidentally, I was informed recently that sloth bears, tigers and leopards live in the forests in Nepal and that people are sometimes killed by them!  Just as well I didn't know that when I was camping!!  I'm still trying to find out the best course of action to take if I ever do have such an encounter.  I think it might be to stay very still, hold your breath and pray. 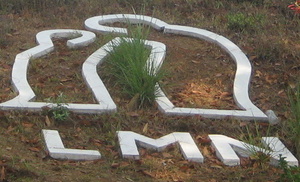 I spent 2 nights in the guesthouse of Anandaban Hospital, hospital near Kathmandu.  I was warmly welcomed by the Director, Shovakhar Kandal, and a fellow guest, Dr Hugh Cross, TLM leader for Nepal.  Unfortunately, his visit was mainly to decide on necessary cut-backs:  income has diminished as a result of the global economic situation.  :-(   Therefore, I appeal to anyone who feels a burden for the plight of people with leprosy and those who are working with them, to support TLM financially.  The work they do is amazing and heartening, providing hope and help to many thousands.  Here in Nepal, there is no government help;  the official line is that leprosy is eradicated and so there is no requirement for funding!!  Two thousand new cases were diagnosed in the first 3 months of this year in the Anandaban hospital catchment area alone!

Without hope people have nothing.  The great thing about TLM's work is that it gives people hope ... which is transformed into action.  Self-help groups are an important part of the strategic development of the leprosy programme.  For instance, on the ward, there was a young 30-year old man with permanently contractured (virtually useless) hands, one leg amputated, currently an inpatient and being treated for problems with the foot of the other leg.  He said that his prospect on discharge was to return to his home town, no home, no family, no friends, to beg and to sleep rough. Imagine! Thirty years old to have that as the vision for your future.  It was distressing for me , to say the least.  When I discussed this, however, with the hospital director, the hope for this young man will be that there is a new self-help group setting up in his town, which should be able to offer practical help, including training for some kind of employment.

I watched the physiotherapist at work with patients pre- and post-op for tendon transplants on their contractured hands.  And I was given a demonstration by a double-amputee of his agility in walking with his prostheses:  his 25-year old one and his recent, temporary one.

One of the encouraging aspects of meeting the patients in the hospital was that there had been no rejection, as a result of them contracting leprosy, by their families;  though by no means is this always the case.

TLM relies on charitable giving.  Therefore, I would urge you to pray and think about whether you can support them in any way. 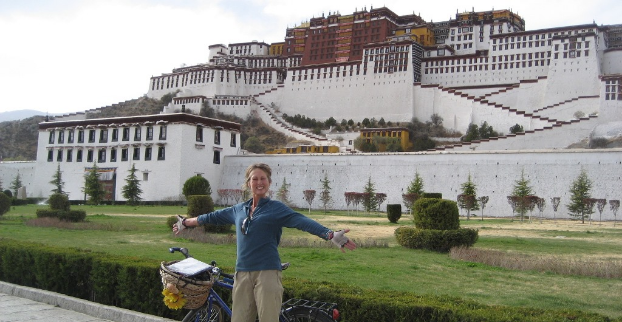 Well, I have made it;  I have arrived in Lhasa!  The group tour was great.  Although I kept thinking, 'if I was on my bike, I could ..... ', I really enjoyed the trip.  The 14 other members of the group are friendly and good company.  They comprise Greek, German, Swiss, French, Canadian, Italian.  The Tibetan guide, Chouedak, is patient and gentle with us, like a mother hen and her chicks.

The drive along the Friendship Highwaywas spectacular:  snowy mountain ranges (we saw Everest in the distance), a glacier, high mountain passes (5200 metres), beautiful turquoise lake, wide high-level plateaux.  The Tibetans we have encountered are warm and friendly and readily incorporate their obvious spirituality into their daily lives.  Sadly, it is very apparent they live under occupied rule with an oppressive regime and one's heart goes out to them, especially as they are such a gentle race of people.

The Potala Palace (the winter palace of the Dalai Lama), is unique and so impressive looking;  a real icon of Tibet. We have visited (very) many monasteries and seen numerous buddhas and dalai lama effigies.  There is a Buddhist amongst our group and we have been sharing Christian and Buddhist thinking.

On the road, we saw a passing cyclist on the road, followed half a mile later by a jeep with a driver and Tibetan guide, followed another half mile later by a second cyclist.  This is the only way one can travel in Tibet, ie with a guide.  Organised cycling trips are always from Lhasa to Kathmandu (cos it is easier from an altitude aclimatisation point of view).  However, if I decide ever to organise a cycle tour, it would have to be from Kathmandu to Lhasa.

The hotel in Lhasa is wonderful.  Real luxury and a great end to the tour.  Tomorrow I have to be driven to the train station, as I am not allowed to cycle there on my own (even though I cycled there yesterday!) from where I (hope) to catch the train to Chongqing in China.  'Hope to', cos not much English is spoken here.  However, things always works out somehow.  :-)