I had thought originally that I should have taken about a week to travel through Syria, but here I am, just over 2 weeks after coming over the border from  Jordan (incidentally, I notched up 5000 miles/8000 kms that day), still with 2 or 3 days more before Turkey.  Why?  Well, because it has been so enjoyable and there have been too many good reasons to tarry and not hurry on straight away to the next port of call.

There are loads of Christian establishments in Syria.  I have been staying mainly in monasteries or convents this last week, which has been really special.

Also, just like buses (none for ages and then 2 come along at the same time), I met 2 independent WALKERS on consecutive days.  The first one was a Dutch guy , Jan, [don't they just get everywhere! :-) ], 6 months walking, on his way to Damascus and beyond, .  We were both staying at this lovely convent (Mar Jakob) between Damascus and Homs.  On the morning we parted company, an hour or so later, I espied another walker with a backpack, who turned out to be Norwegian!!!  He had been walking 7 months, also on his way to Damascus and beyond!!!  We spent 2 1/2 hours by the roadside chatting and eating lunch.  He carries a violin with him; and not much else by the looks of his backpack. Jan was the same;  very impressive light travellers both.  Christian, the Norsk guy, reckoned I was a "really cool woman" to be doing what I'm doing.  I was chuffed.

I've stuck largely with the main highway, but occasionally struck off along country roads.  A couple of days ago, I ended up going round in a big circle, coming back to the highway and passing the same junction I had come off just 24 hours earlier (another reason, perhaps,  why it is taking me longer than originally planned to get through Syria.

I have had wonderful hospitality in Syria.  But I also have had 2 rejections of help;  both from monastic communities of St George!! But the 3rd encounter with St George redeemed his name.  This was after the 2nd rejection and, in need of a bed for the night, I resorted to the St George Hotel over the road, as there did not seem to be anywhere else locally.  They were very kind and friendly, gave me a hefty discount and included evening meal and breakfast, plus coffee and finger-of-the-bride biscuits the next morning with the sister and family of the hotel manager.  I went back to the St George monastery (btw, it is located near Crac des Chevaliers castle) and said that it was not right that I was sent away with nowhere to go except the choice of a further 4 hours cycling to another monastery.  It fell on deaf ears.  But the priest did then mention a church 6 kilometres away at which I could have found accommodation!!  I think I hope in vain that future travellers might have a different experience from me.

I spent 2 hours yesterday changing over to the new tyre I bought in Damascus.  It is a much bulkier tyre and was pressing up against the mudguard.   My bike multi-tool actually isn't it - I've hardly found anything on there that is useful -  and so I borrowed an adjustable spanner from one of the 2 monks at the lovely Mar Elias monastery and was able to make enough room for the tyre to spin freely.  I also had to adjust the brakes to stop a slight rubbing.  It rained all day today and the monastery was on top of a very steep hill.  Good timing, I say.

I'm still cycling in sandals, although some mornings in the mountains I have been wearing long (pink) socks as well until late morning when the air becomes warmer.

My first full day in Turkey.  Brrr .... it is extremely cold.  I thought I was going to suffer from exposure yesterday when I came over the pass from the border to Antakya (Antioch).  And it ıs only going to become worse.  I need to keep an open mınd that I might even have to resort to alternative transport, ıf conditions become too bad for me, eg. snow, ice, freezing rain.  Yuk.  The very thought is enough for me to go out and buy my bus ticket.

My last night ın Syria ended just as my first began: staying with a local family rather than in a hotel.  This time I had gone to a large church I had seen in the distance, thinking there mıght be accommodation there.  It was closed.  But a woman and her 5 grandchildren came along to fine out if they could help.  And, of course, offered me a bed for the night.  Doesn't it just bring tears to your eyes?

The border crossing was easy peasy: about half-an-hour all told.  But the ride to Antakya was not:  uphill for half the way; dıffıcult, recently top-dressed, stony road surface; ıncredibly strong head/cross/cross-head wınds; freezıng aır (my fırst icy puddles). I wore my warm hat, together wıth my snood, and my full gloves for the first time.  Even the downhılls had to be peddled.  Most dispiriting.

Eventually, though, the easıer downhill came and then, on entering the town before Antioch, Harbiye, the road was suddenly smooth and, oh such easy cycling - a pleasure.

I found the Catholic Church and the pilgrim refuge.  I am staying a couple of nights, as Antioch is significant from a Christian point of view, both Peter and Paul having spent time here.  Antioch was the first place where followers of Christ were called Christians.

Hardly any English is spoken and so I need to learn some phrases to stay alive, metaphorically-speaking.

And now, to sign off this journal entry, a special greeting from Homs in Syria: 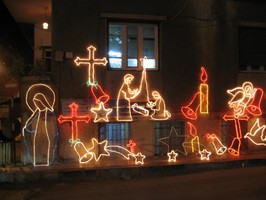 I WISH EVERYONE A HAPPY AND BLESSED CHRISTMAS 2008

I hope everyone is having a wonderful day. Thanks for the many Christmas greetings;  they really mean a great deal to me.

I have enjoyed hugely cycling through Turkey.  Again I have experienced warmth and hospitality with a family when there was no formal accommodation.  I had  been told there were both church and hotel accommodation in two towns, but this was not the case;  not even pension-type.  The light was fading.  On the edge of a small village I made inquiries at a filling station and was directed to the house next door at which I asked if I could put up my tent in their garden.  The upshot was, that, having put it up, I was invited into their cosy warm home, ate with them (sheep's-intestines-&-other-stuff soup!  , but they kept giving me more!), drank loads of hot, sweet 'chay' (wonderful), and slept in their cosy warm home (having first gone to the freezing outdoor loo and washed hands and brushed teeth at the outside cold water tap - brrr).

A couple of days ago I spent the night at a school house and then ended up as a guest in four of the English classes ın the school.  It was great;  I really enjoyed it.  Apparently, it was the first time that most of the children would have encountered a foreigner.  It gave them the opportunity to realise that their textbook English actually had a use!  I have to say that the national English course they have to follow is dreadful:  it does not result in any conversational English at all.  What a waste.

This part of Turkey is strongly Kurdish.  Diyarbakir is a great place, despite the fact that, a few days ago, a car at the nearby military airport, was found full of explosives and kalashnikovs and that, yesterday evening, when I was walking back to the hotel, a couple of local rival gangs were shooting at each other in the street with real live guns!!   At first I hadn't realised they were gunshots;  I just thought they were firecrackers or something.  Even when I did realise they were real gunshots and bullets I wasn't afraid, cos the local guy I was with was great; he was quite calm about it and we took it in our stride and just kept on walking.  Even so, Diyarbakir is still a great place:  Christians, Jews, Moslems live here very happily together.  I've met some locals and it's been interesting and enjoyable talking with them.

I tried going to a Christmas service today:  I went along to St Mary the Virgin Syrian Orthodox Church, but it was like no other service I had experienced.  Apart from the fact that there was no order of service of any kind it was not even clear when the service itself started;   there was no attempt by the priest to involve the congregation at all - he didn't even acknowledge we were there, even by a glance in our direction;  and then, halfway through the service, about a dozen people suddenly entered with huge professional-looking film cameras and flashing still cameras walking round the church filming and taking pictures of everyone, as though there was no service going on.  Fınally, to cap it all,  when I was quietly sitting and praying and attempting to get something out of this Christmas Day service, a woman indicated to me that it was disrespectful to sit with my legs crossed.  I gave up trying to suggest to her that, possibly, the cameras were rather more disrespectful but nobody seemed to be telling them to stop!  By this stage I had had enough, put my shoes back on and walked out.

So, the most Christmassy thing I did today from when I woke up at 6 o'clock excited to see what Father Christmas had brought me! [a pair of brightly-colourful, toe-ed socks and a 2009 diary  :-) ], was listen to Handel's Messiah on my ipod and to wear my Christmas earrings I'd brought out with me from UK.

I have enjoyed the day.  I Skyped my children in the morning and then my family later on.  After which, a local guide I had met when I arrived on the 23rd showed me round the city: the city walls date back to somewhere BC; there are many churches and mosques and beautiful, stripey pashas (buildings), similar to those in Damascus;  and the souks are always fun to visit (I learnt lots about knotted rugs and kilims.  If anyone wants rugs at really good prices I can supply a contact number.  :-)