I said 'goodbye' and THANK YOU to my Abu Dhabi hosts yesterday morning, having had a week's rest and hospitality from them, including unlimited internet access (a few more photos now online).

Whilst in Abu Dhabi, I obtained my Indian visa, saw the golden oppulence of the Emirates Palace Hotel, wandered along the port with the fishing dhows, marvelled at the way the Emiratees have adapted to the sudden and dramatic change of lifestyle from desert people to high-rise entrepreneurs, had my legs waxed and left behind 4 kilograms of baggage (even so I am still cycling with a total of 52 kgs, 20 kgs being my bike).

I cycled, without police escort, along the wide, clean hard shoulder on the E22 motorway to Al Ain, a total of 105 miles (168 kms)!! By far the furthest I have yet cycled in one go (flat terrain plus tailwind) and unlikely ever to be exceeded, except possibly if I was to cycle in Holland.  For the first time on my trip, I felt my legs seizing up in the evening. But a hot bath before bed and, voila, today I'm fine.

Now I am staying with friends of friends in Al Ain, heading off early tomorrow morning across the border to Oman and the coast.  Peter, Heather and the children have welcomed me warmly and are making sure I have enough to eat; also giving me unlimited internet access (what would I do without it?). THANK YOU.  In the meantime, their teenage daughter is today having a Chinese murder mystery birthday party!

No joy, as yet, with a passage to India. I shall arrive in Muscat in about 4 days where I shall go to the port and see if I can organise something directly.  I really do not want to fly.

Below is the deaf relative of an Iranian I met in Cyprus, who makes beautiful Persian rugs.

I am glad to have the opportunity to promote his work and expertise.  He can be contacted via his email:  mohammadi.davisara@gmail.com and, at some point in the future, he will have a website to view more of his work.

A new continent.  After 4 months in the Middle East,  I left Muscat in Oman on 12 February.

I failed in my (considerable) efforts to obtain a sea passage to India.  :-(  So much for my ethos of slow boats, instead of frenzied flying.  It was a real disappointment.  Ah well, what can one do, but try one's best?

On the way to Muscat, I encountered various surprising folks, not least was the Palestinian who, in response to my saying I was English, immediately countered with 'I hate the English - more than the Israelis, more than the Americans' - and then ended up giving me accommodation for the night!

Other accommodation included staying in a home in a village, in a hotel in Muscat, then 2 nights with  a Malaysian/Aussie family, as a result of an encounter in a breadshop when I had asked if I could pitch my tent in the garden. Su, Kieran, Frankie and Caitlan were very welcoming;  Caitlan, in particular, seemed struck by my trip.  Thanks, guys, for such a comfortable stay.

I met a cyclist!  Always cause for celebration.  Peder has cycled from Sweden via bits of Africa to Yemen, to Oman, now going on to the Emirates, Iran, the Stans and China (then see how his money goes).  As usual with cyclists, a joyful encounter.  He was interviewed in Oman resulting in having a couple of articles published in Omani papers that week (I have a copy of one of them).

Now, having gone through the trauma of flying with my bike (being joined, on my way to the airport, by a Brit, Barry, out for a cycle. He flies helicopters), I am in India.  I arrived at and left Bombay airport cycling north along Highway 8. For the first 40 kms or so, all I could think of was: a) I'm going to die b) I can't handle the squalid poverty  c) I want to get out of here.  Truly the worst first impression of a country I have so far encountered.

Since then, though, things have looked up:  I am still alive; I have been staying with the most lovely Indian family from Luton; I've spent the last 2, of 5, days at an Indian wedding.  I met Nick coming out of a restaurant of a hotel where I was going to inquire about room rates.  He invited me to stop over when I passed Naswari.  His parents, Ishwar and Indu (known also as Ken and Linda!) have been totally non-plussed by my turning up out of the blue, even inviting me to the celebrations of the double wedding of some cousins.  I was welcomed by the wedding host as the woman 'who has cycled from London to be here' and invited onto the stage to say a few words!

I was taken on a visit to a Deaf school.  It is residential, started in the 1950s; sign language is the communication and teaching language; and the children are delightful, even being able to understand my signing and me theirs (to some extent), which begs itself to encourage possibly setting up some connections  with the Deaf school in Bristol?

Weather is hot.  England, I hear, is still snowy and cold. Poor you.

I have waited until now to write something about my side trip to Israel as it is such a sensitive issue in the Middle East.

After my holiday in Asia and saying goodbye to my friends in Amman, I went down to the Dead Sea and crossed over to Israel, spending the first night in Jericho, which is under Palestinian administration.  I had a friendly reception, even taken by a taxi driver to the outskirts of Jerusalem (he's not allowed within Jerusalem itself) and shown the dividing wall.   A horrible sight.  Has it worked anywhere else?  Haven't we seen walls in other countries come down?  Why? Why? Why? is all that goes round your mind.

Next day I cycled to Jerusalem.  It was only 30 kms from Jericho, but it was tough.  OK, I was going from below sea level to quite how up [no, I don't know the elevation!  :-) ] and some of the gradients were pretty steep, especially after the turn-off from the main road towards Jerusalem itself;  but also it was the day after my pretty bad fall on the downhill skating rink and I think I must have been physically shaken enough to have affected me the following day.  As it was such a short distance I underestimated the time it would take and I ran out of water;  but someone stopped to offer me a lift, which I declined, but they also gave me some water.  Something always turns up.

Cycling down the hill into Jerusalem was great.  It was one of the things on my trip to which I had been looking foward with enthusiasm and awe. It was great feeling to be in the Holy City.   I was wondering around the area of Jaffa Gate looking for some accommodation, which is when I encounterd the endless numbers of cyclists, at the end of which was Tom, The Hungry Cyclist.  I stayed in the Jewish Quarter in a comfortable hostel for girls/women for 3 nights; one of the people I encountered was a nuclear scientist spending a few days in Jerusalem after some conference down south.

The place I really wanted to go to was the Garden of Gethsemane, not for the church, but for the site where Jesus supposedly prayed in anguish to His Father, whilst his disciples slept, before being betrayed and arrested.  A little stone carving depicts the place (I included it in my batch of photos for that part of my journey - see if you can spot it).  I sat there in quiet reflection for quite a while, reading the passage in the Bible.  It is such a poignant reading.  Many people go past without even noticing the little shrine, going straight to the big church a little further on, but for me, it was a special time just being in that place.

I visited Jaffa, Tel Aviv, Nazareth, Sea of Galilee.  I wanted to stay on a kibbutz, but they are run on such a commercial basis now that they were well beyond my means;  neither would they allow me to put up my tent in the grounds, even though I was told by some Israelis in Jordan that I would be able to do so! Humph!  However, my last night in Israel, right at the border, I did end up staying in one, only because there was nowhere else and I had misheard the price the woman quoted me and so thought it was going to be much cheaper than it actually turned out to be!  But, it was, after all, what I had wanted to do.

I was very glad to have been able to have cycled through the Holy Land.  It was one of the important destinations for me on my trip.  I met wonderful people.  I feel so sorry for the limitations that so many nationalities have in their freedom of movement around the world.  I realise how privileged I am to be born British, as it does not limit me in such a way.  It is very humbling.  I met an Israeli who dearly wanted to travel to Iran because he had heard of the friendliness of the people;  but, of course, as things stand, there seems to be no chance of him ever being able to do that.  And, likewise,  Iranians wanting to visit countries such as Israel and unable to do so.  Such a shame.  Such a sadness.  Why?

I love India for the amazingly beautiful colourful saris everywhere you turn.  The colour is made more vibrant  against the neutral colours of the landscape and many of the buildings.  At the same time, it seems such a strange juxtaposition to the dirt and squalor that also abounds.  Maybe it is precisely for that reason, even subconsciously, that there is this glorious, distractive palette.

I stayed with friends of the Luton family a couple of days up the road, followed by a few days cycling and staying in dirty, grimy hotels.  Which, I think is why now, in Udaipur, I keep on staying an extra night (3 to date, but I am definitely leaving tomorrow morning, after my fourth night here).  Why?  Because I am staying in a delightful oasis of a guest house:  family-run, relaxing, great home-cooking, chipmunks scooting around all over the garden and the host saying, tomorrow is tomorrow, see how you feel then.

I have visited the City Palace, currently have henna-ed hands, had a 'manicure' (but need to get out my nail file to complete the job!), a 10-cut hair trim!, and invited home for tea and chapatti by the manicurist (cos her daughter spoke English - of a sort). 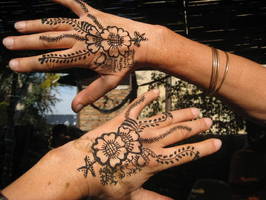 (look carefully at the design - you might spot some familiar names)

I'm reading lots;  apart from the Bible each day, I've just bought Slumdog Millionnaire (don't say I don't try to keep up with current trends!) and another Paul Coelho book, The Zahir (I was given The Pilgrimage before leaving UK).