Quite a while since my last journal entry.  Why?  Well, I've been busy doing  China in 7 days!

Having  (eventually) boarded the train in Lhasa (no, you can't bring your bike on the train.  Well, ok, but you'll have to fold it up and put it in a bag.  Better still, why don't you forget the train and take a plane?), I settled into my hard-sleeper compartment, which comprised 2 x triple-decker bunks and, to my surprise, included comfortable, clean mattress, duvet, pillow and case.  My lovely Raven, of which I am becoming increasingly fond (it's the model name of my bike, by the way;  quite apt, don't you think,  cos I feel free as a bird when I am cycling along), was propped safely against a wall behind a door very near to my end compartment (see, things always work out somehow).

I was the only non-Chinese on the whole train.  My compartment companions were friendly and generous;  we all shared food and drinks and they wouldn't allow me to refuse anything (although I somehow managed to forego the proffered chicken feet -  but not the pigs' ears).  The whole time I was in China (yes, all 7 days) I never came to terms with the noisy throat-clearing, followed by the impressively-productive, watch out, here it comes, gobbing!  Especially when one of  the guys in my compartment did it twice on the carpet and ground it in with his shoe. How yuk is that?!

I had thought the train trip was just 23 hours (I'm sure the travel agent in Kathmandu had said I would arrive the following day),  but maybe I should have been suspicious when another of the tour group found out the day before that his train trip to Beijing was 48 hours, not the 24 he had been told.  But, hey,  not a problem.  I enjoyed the train journey:  we travelled across the Tibetan plateau for all of the first day and so the landscape was quite remote.

On arrival in Chongqing, I went first to the cruise ferry terminal for sailing down the Yangtse, then along to the police station to try for a visa extension, fully expecting to to be granted it according to reassurances from various peoples along the way.  But, no.  No way.  Being on a group visa, and now having left the group, the only way would be to go out of country and re-enter.  Oh dear;  10 days of my visa already gone;  only 6 remaining.

The cruise down the Yangtse from Chongqing to Yichang was hugely enjoyable:  great scenery,  side trips to the 3 small gorges and the dam; ride in a dragon boat, traditional theatre performance.  It was one of the main resons for wanting to go to China.  I shared a cabin with 3 other Chinese.  The only other non-Chinese on the boat, discovered after 2 days, was a young Slovenian couple.  The cruise gave me a chance for reading:  Anil's Ghost (Michael Oondatje, the author of The English Patient), good, but harrowing.

I stayed in a hotel overnight in Yichang, then, on the advice of a taxi driver, decided to travel by sleeper bus, instead of train, to Shanghai (it was quicker and would arrive half a day earlier).   However, the conditions were not quite as good as the clean train I had experienced  from Lhasa:  the bedding looked as though it had not been changed since the commissioning of the bus!  Definitely a case for using my sheet sleeping bag and shawl.  Even so, it was a new experience to travel in this way, although not necessarily one that needs to be repeated.

On arrival in Shanghai at 7am,I cycled immediately to the cruise ferry port, to find there was one leaving that same morning, the next one was in 3 days.  There was no option:  my visa expired the following day.  The ticket had to be paid for in cash;  I found a bank;  but, just as in Chongqing, I was unable to use my (no charge) Nationwide Visa debit or Visa credit card, forcing me again to use my (chargeable) HSBC Maestro.  Back at the ferry office, I then had to say a temporary cheerio to Raven, as it was transported away and onto the ferry.  In the whole of my trip to date, this is the first time I have had to pay extra for my bike.  I'm being well looked after.

The 46-hour ferry trip to Osaka in Japan was lovely.  I had a really friendly Chinese mother and daughter in the same cabin;  the daughter, Yue, spoke excellent English.  I spent much of the journey in the company of a young Englishwoman, Sophie, travelling around Asia.  I sampled something for what Japan is famous, namely its hot baths, which you can find everywhere.  I went along to the one on the ship;  the tub was by the window and sitting there looking out on the sea and at the horizon watching the ships go by was quite surreal.  Whilst on board, I heard for the first time of the flu epidemic.  Before we were all allowed to disembark, a masked team of officials came on board to take our temperatures, as a precaution.

In Osaka, I stayed a couple of nights in the cheapest accommodation, the Osaka Municipal Youth Hostel.  Wow!  Fantastic.  Clean, friendly, wi-fi,  quiet (it was just before the busy Golden Week holiday, which is now in full flow), hot bath.   I met a Canadian and a German, both travelling independently and a lovely Japanese woman.

I had to have a new chain fitted on Raven;  my old one had done 15,000 kms and insisted on retiring.  However, the new one, fitted onto the existing chainwheel and sprocket is like putting new wine into old wine skins (as my bike bloke described it), hence the embarrassment of having now to cycle along with a noisy, clanking chain;  hopefully, though, it will eventually wear down to a more acceptable noise level.  I had to pay for 2 chains, cos mine is longer than normal;  I also had to pay extra for a stronger-than-racing bike chain.   Next time I need to replace, I shall try and have the proper parts sent out to wherever.  I have been sending photos of my chain to my bike bloke, Robin, for his advice and I should like to take this opportunity to say that I am receiving great technical support from him at Thorn Cycles.  Thanks.

I am now in Kyoto, having cycled here a couple of days ago.  I am enjoying Japan hugely at the moment; although the shock of how expensive it is is quite great.  I have met other travellers, including a bunch of cyclists who have just arrived from Tokyo and so gleaned some hot tips for my ongoing route; also some Japanese people here on holiday for Golden Week, the main holiday festival of the year.  I watched 2 1/2 hours of Kyogen drama (traditional theatre) and am about to go and visit the Golden Temple.  Kyoto was the capital of Japan for 1000 years and  is very much the cultural centre of the country.

Apologies for this hugely long journal entry, but, as you can see, circumstances forced it somewhat.  BTW, I have just placed a Mediapage in the Contact section.

My first anniversary!  I am halfway round!  I can`t quite believe I have come as far as I have!

My first 3 weeks were very wet;  I was camping.  The first 3 weeks of this second year promise to be the same;  it is now the rainy season and it rained all last night and first part of this morning.  I am camping.  Unfortunately, unlike France, I shall be unable to become a pilgrim here in Japan, in order to escape the rain.

I have enjoyed this last year HUGELY;  I have no regrets embarking on this trip;  my guardian angel has had to bring in reinforcements, I am sure, in order to keep me safe, but has done a great job.  :-)

A big thanks to my family and friends who have given abundantly of their encouragement.  Especially, though, my heartfelt thanks to my wonderful children, Jessica and Daniel, to whom I send heaps of love. 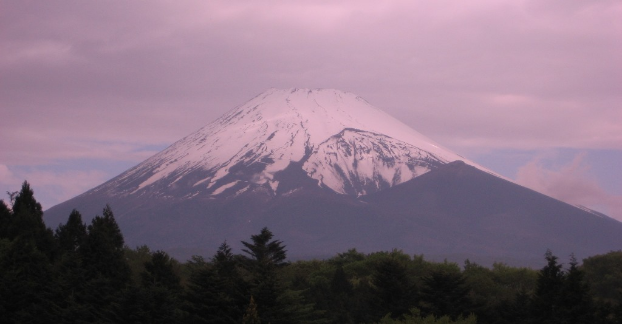 Japan is a disarming delight!  Yes, it is clean, ordered, quiet, polite, but more strikingly, is the sheer spirit of hospitality of those I have met.  Since leaving Kyoto, I have camped just 3 times (once on a campsite, twice not); the rest of the time (7 nights) in people's homes, on a couple of occasions for 2 nights, such was the kindness.  These all came about from me asking about campsites; and if those of whom I inquired did not speak English, they phoned a friend, who usually ended up coming along and inviting me to stay!  Amazing.

I have been sake-ed and sushi-ed right royally:  I stayed with restaurant-owner, Suzuki, and his girlfriend, Masai;  was brought a platter of specially-prepared sushi by a fellow restaurateur;  was taken to another friend's soba (buckwheat noodle) restaurant the following day for lunch; thence on to someone else's house for more food and sho-chu (potato-based wine)!  The daughter of one of these friends was contacted and arrangements made for me to stay with her in the next town, Nagoya.

I have wallowed in numerous hot baths; slept with a picture-window view of Mount Fuji (the only clear sight of it was between 4 and 7 on my first morning, the weather currently being somewhat inclement) and again treated to more delicious Japanese cuisine and friendship.  I visited the World's Kite Museum in Yokaichi, watched a video on how and why giant kites are built and saw one of them on display:  the size of 100 tatami mats (or 12m x 13m).  It takes 600 people to make a giant kite, 20 people to carry a rolled-up one for transporting to the competition site;  100 people to pull it along to launch it.  I also found myself cycling along the Pacific Coast (wow, the Pacific Coast) Bicycle Route;  which was really pretty for much of it.

Mount Fuji is pretty spectacular.  My first sighting was whilst slogging up a hill:  I'd been concentrating so much on the exertion of this that, when I eventually glanced up, it was to reel back in shock to see this socking big mountain just in front of me!  Very impressive.  Totally dominated my landscape for the next couple of days.  What I also thought was quite awesome was when I realised that Fuji is 3776 metres high, but that when I travelled through Tibet, we went over a pass at 5200 metres! Wow.

I am  now in Tokyo, staying 3 nights.  There is the Asakusa Shrine Matsuri festival this weekend, involving street processions with groups of people carrying shrines on bamboo poles, chanting and marching in a bouncy, rhythmic way, accompanied by flutes and drums and men dressed in very short kimonos, exposing  bare buttocks!  Weird.  (well, it is to me).

So, another 6 weeks or so in this lovely country.   Great.

(BTW, there are some new photos to peruse).