I found out about 6 weeks ago that I needed to create a new website, as the old one would be closing down soon.  After a quick panic at the daunting task of transferring all content, including links, to a new site, I set about learning how it all worked. It's quite different from the tools used with the old site; some things better, some not. Anyway, here 'tis.

Apart from that, I've been busy doing anything but cycling, seemingly, over the last year. But I hope to change this - just as soon as the weather becomes much warmer. :-) If it does, and if I can get my act together and check out my tent (my very expensive Hilleberg needs a new front zip - apparently, a not uncommon occurrence with this make), then I plan to take my bike up to the west coast of Scotland in a few weeks, from where to embark on a small trip.

Last year saw the 10th anniversary of coming up with the concept for my first trip. I half had in mind whether I would then come up with the possibility of a second one. Duly, whilst visiting my freighter ship friend on Okinawa last June, I was looking at a map of North America and thought, hmmm, how about taking on the Lower 48 (states of America)? I would start in Maine and end up in San Diego, by which time Krista, would have moved back there permanently. I would do each of the four time zones in succession, zigzagging up and down the country.

However, this idea doesn't seem to have taken hold of me with too much enthusiasm: the map of North America on my bedroom wall to date having no route indicators on it or anything else to suggest a trip in the offing. Some of my procrastination is to do with my house and, if I were to let it out as a whole, the thought of having to pack it up for a year; the whole hassle of the exercise appearing rather disproportionate to the comparatively shortish time I'd be away.

Recently, however, someone suggested just doing the east coast - as being rather a pretty part of the States; and also why would I want to go across the central states, which are not perhaps the most scintillating of landscapes for the slow-paced cyclist?

Now this idea appealed to me; and looking back at previous Post-trip journal entries, I see that a wish-list trip to do was the east coast of America, as I'd only gone down the Florida coast. And If I were to time it right, I could be passing through New England during the Fall. So, my intention would be to cycle the whole of the east coast time zone, which I reckon might take about 3 months - at a very rough estimate at this stage.

In the meantime, too much talking, so here are a few general pics from this year so far (quick tip: hover or click on the image to view the accompanying caption):

My 2 weeks in Scotland, staying with my elder brother in Drimnin on the west coast, was accompanied by rain, every day, and for the most part each day.

No matter, decked out in wellies and waterproofs meant outdoor activities could still be pursued. :-)

Instead of the 5-6 days cycling and camping I had originally planned, I managed just 2 days; but enjoyable ones all the same, on the delightfull Isle of Mull.

Warmshowers is an internet site, offering reciprocal hospital to touring cyclists. I first encountered it in the States and consequently stayed with quite a few charming hosts.

A number of Warmshowers cyclists have stayed with me this year, all interesting with their various trips. 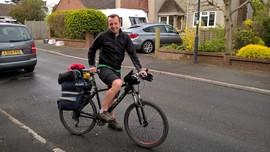 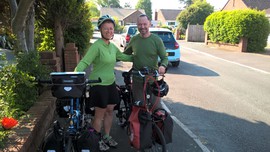 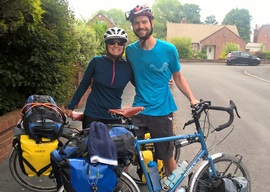 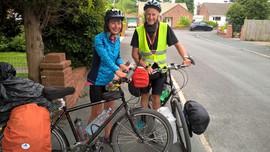 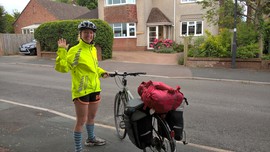 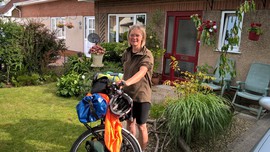 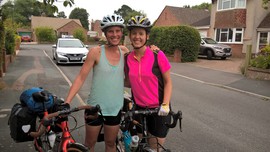 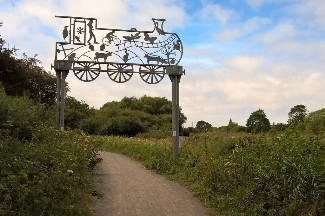 There was an ideal opportunity, recently, for me to do a great little mini weekend break - and it almost came off.

A couple of weeks ago, on a warm, sunny day, I did a little reccy in preparation for the above: I cycled the couple of miles from my home to Patchway train station, boarded the  9.39am to Yatton, alighting half an hour later (paid retrospectively for my ticket at the Ticket Office), then cycled the flat, quiet 6 miles of the Strawberry Line extension to Clevedon Pier, arriving 30 minutes later. 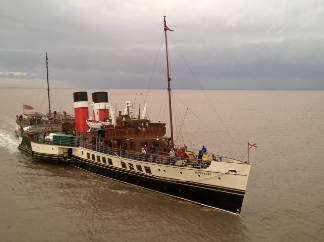 I repeated the above section a couple of weeks later, setting off from home morning of 3 September.

On the way from Yatton to Clevedon, it started raining. On the pier was some shelter, where I dried out a bit during the 50-minute wait before the arrival of the Paddle Steamer Waverley, the only sea-going paddle steamer left in the world, 70 years old this year. It is kept going as a charity, with mainly sailings up round Glasgow, but scheduled for 3 round trips down and up the north Devon and South Wales coasts.

The idea was to disembark at Ilfracombe, one of a couple of stops during the round-trip, where this would be possible.

It should be a perfect incorporation into cycling the Devon Coast2Coast; the north Devon route starts in Ilfracombe. 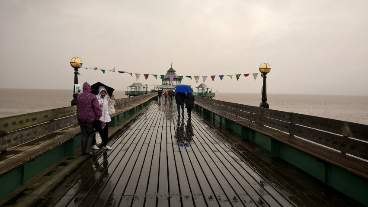 However, there's one factor that is difficult to factor in: the weather. And, on this occasion,  the announcement over the tannoy, once everyone was onboard the boat, informed us that the weather was bad enough to prevent the Waverley from docking in Ilfracombe, so that anyone who had planned to do that, now had the option to disembark. Five of us duly did that: 4 cyclists and an elderly gentleman.

The only trouble from my point of view was that I'd had to lug my bike and baggage down 4 flights of steps and along a narrow ramp to board the paddlesteamer and now I had to repeat the same arduous exercise in reverse! I was kindly helped by one or two others, including one of the cyclists, who had a Brompton and comparatively little baggage. We ended up cycling back to Yatton together, buying a ticket for Barnstaple and then successfully and smoothly taking 3 trains: Taunton, Exeter, Barnstaple, arriving at our destination 3 and a half hours later.

The guard on the Taunton train was delightful; someone who obviously loves his job and really went out of his way to make everyone's journey as pleasant and stress-free as possible: after a couple of stops, at which I had to get off the train to let passengers off and others on, and then get on again, he tipped up a whole line of seats, allowing plenty of room then for all of us cyclists to park out of the way of other passengers.

My companion, Phil, and I arrived in Barnstaple about 4.30.

We both needed a cycle shop and, fortuitously, there was a Halfords cycle super store nearby, where we were both able to find what we needed (mine was a new battery for my speedometer).

I then cycled the short 6 miles to Westleigh, where, happpily, I'd booked a b+b, Honeysuckle Cottage. Run by Rob and Ann, I received a really warm welcome from them both, including tea and homemade cakes, before heading off across the road to the Westleigh Inn, where I'd reserved a table for evening meal for 7.30.

Just before going, the heavens opened and absolutely tipped down. I was lent an umbrella and, in about 10 strides, reached the Inn. The barman rightly deduced I was Astrid and indicated my table. A few minutes later, Phil came dripping in, promptly supplied with a towel by the same barman.

He had thought to camp, but that didn't turn out as expected and, wisely, decided to book a room instead at The Royal Hotel in Bideford, right on the cycle route - very convenient. We had a lovely meal and then Phil cycled off the few miles to hotel.

The next couple of days were pleasantly dry, with some sun filtering lightly through on the Sunday. Contrary to my expectations of largely flat adn traffic free, the route had a large proportion of onroad devon lanes, which, if you know anything about Devon, went up and down with no mean inclines. I found them quite painful, not made easier by my current level of unfitness, and so was inexorably happy that the last 17 miles or so (Yelverton? to Plymouth) was all downhill. Oh, bliss!

The second night was spent in another b+b, Churchtown, in Peter Tavy, run wonderfully by Major and Mrs Lane.

I have to say, the train trips this weekend were unexpected delights, as so often I have found them totally stressful, with time constraints in station putting huge pressure on getting your bike and baggage on/off board.

Here are pics from the weekend.