The ferry arrived in Plymouth at 9.30 on Friday morning to cold, overcast skies (but at least it wasn't raining!).  There was a young German cyclist, Achim, onboard, cycling around Europe, now starting his UK leg.  He and I cycled into the city centre, to the tourist information centre (extremely friendly and helpful staff there),  extracted some money from the ATM, had coffee and cake in a cosy tea room, then parted, he to find an electrical shop to repair his homemade dynamo-charging apparatus, me to head in the general direction of Bristol.

These last three days ended up being tougher cycling than I had anticipated.  The first day I made the mistake of going along the coast:  long, slow steep hills, no hard shoulders, busy roads, fast traffic (hmmm ... a bit of deja-vu, aka Santander?!).  I ended up at a campsite in Dawlish (south of Exeter).  It rained in the night.

The next morning, a chap, Dave, came and chatted about my trip, invited me for a cup of tea and a look on his computer at the possible cycle routes and then helped push my bike across a hilly field, as a shortcut to Dawlish Warren, which then took me along the road by the river Exe, to the towpath, leading eventually to the canal to Exeter.

This particular morning was one of those occasions when the right people come along at the right time.  Having met Dave, who told me about the towpath, I came to a locked gate and one of those totally bike-unfriendly kissing gates, when, standing contemplating taking off all my bags to be able to get through, along comes a chap in a car, stops, confirms the towpath is bike-friendly - and produces a key to unlock the padlock on the gate!!  He then also mentioned that, at the other end, there  is a second locked gate, but, fortunately with a low wall running at the side of it, upon which I could just hoike my bike and wheel it  pass the gate post.  Simple!  (maybe he thought my panniers were filled with polystyrene!).

At the end of the narrow, slightly muddy, quiet and picturesque towpath, there was the gate - and the wall.  So... up I hoiked my bike onto the low wall and wheeled it passed the gatepost and back down onto the road.  Simple  :-)  Then a pleasant ride along National Cycle Route 2 into Exeter - and pouring rain.  Some kind joggers guided me to the right road and a passing chap confirmed my ongoing route, chatting, in the pouring rain, about his north to south Americas cycling trip next year.  Everyone is so helpful.  :-)

Continued to Taunton - back on busy roads.  Bought a simcard.  When I said to the shop staff that I was coming to the end of a two-year cycling trip round the world, one of them asked if I was a celebrity?!  I thought, 'do celebrities do 2-year round-the-world solo cycling trips?! - or just 4-month, accompanied, fully-supported, tv crew in attendance, motorbike around the world trips?'.  :-)

I managed to get as far as North Petherton, just south of Bridegwater, before calling it a day.  I checked into a cosy, homely B&B (there was no way I was going to camp - on my last night, in the cold and rain!), cycled the mile into town for a  home-cooked pub meal, back to the B&B, chatted with the owner, Margaret, over a cup of tea, wallowed in a soap-suddy bath, slept in a cosy, comfortable bed.  Next morning, after a full English breakfast, I waved my goodbyes and set off for the final day's cycling.

I stuck to the main road because I thought this would be the most direct and easiest way home.  As the weather was pretty horrible (strong headwind and rain!!), this seemed the right thing to do.  Actually - no.  The A38 is much hillier than I had thought, no hard shoulder, busy traffic.  It was hard going and I realised I was going to have my work cut out for me to arrive home by 3pm - the designated time set by my daughter!  :-)

And, yes, it was hard, but, at 3.30pm, cold, but no rain (the sun had been out long enough for me to take off all my layers of clothing and plastic bags on my feet!), I was cycling along the country lane in Almondsbury,  when, ahead at the side of the road, were my son, younger brother and nephew, waving, blowing horns, filming, photographing!  We all four cycled the remaining mile home, coming up the road, straight into the lens of a friend, Peter's,  video camera, then round the corner  to a fanfare of horns and cheering, balloons, Welcome Home banner and waving of my daughter,  family, friends and neighbours - and the lens of my elder brother, Rick's, video camera!! What a moment!! 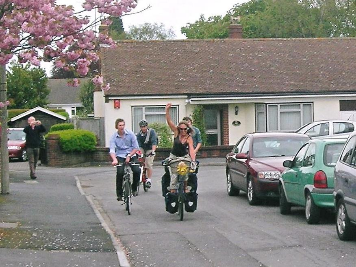 Off my bike - and the the long-awaited embraces with my daughter and son.  Hugs with everyone, some pink fizzy stuff to imbibe. a short speech:   the realisation of the importance of dreams becoming reality;  of, yes, looking to the future and learning from the past, but, making sure, to live the present!  Giving thanks to God for being with me throughout my trip;  He is a great traveling companion.