Hello, everyone, welcome to a new year - and loads of resolutions?  Well, may I make a small suggestion?   How about forgetting about trying to make any resolutions -  instead just get out there and do it?!  :-)

Weather continues to be  extraordinary for the area:  10-15 degrees colder than  it's ever been.  WHY, the year  that I  am cycling  here?  Huh!  Even  so, today's forecast  was for ICE PELLETS, but I m sooooo glad  to say that they kept well away  - although it was  still extremely  cold and hot pads in our shoes did nothing to prevent them becoming blocks of ice.

I am saying 'we' because, since leaving Austin and staying with more warm showers hosts (thank you, Carol, Randy, Jody & Susan), and invited for breakfast at the Red Door b&b (thanks, Nell), I have teamed up with Nicole,
whom I first met in Big Bend National Park, when she was then cycling with Judy [who has now returned home to run a marathon in 10 days' time.  Well, each to their own, I guess.  :-) ].  We are now about to leave Texas (it's taken a month) and cross the border tomorrow to Louisiana.

The terrain since Austin has been mostly flattish, especially since Carmine, my first day out of Austin, on which day I cycled 72 miles, [including 17 miles along a dirt road through Bastrop State Park, variously flooded at intervals, plus one softly-mudded section right across the road (thanks for the route, Rangers!)] before I was met by my warm showers host in her pick-up to take Raven and me to her home, in the back of beyond along 6 miles of dirt road.  (are you keeping up with all this?).

A couple of days' ago, our accommodation was a snugly warm travel trailer, kindly leant us by Dina (more thanks), whom we met in a hardware shop in  Coldspring.  She even went ahead of us to turn on the heating and to leave a pizza for us.

Tonight's warm motel has been provided courtesy of the Central Baptist Church in Kirbyville!  :-)  Previously, I,  and now Nicole and I, have asked at churches to be able to put our sleeping bags on the church floor for the night - and been declined.  This time, however, the response was to pay for us to stay in a motel (because they had allowed a guy to sleep in their church before and it had not gone well). So.  How about that?!  Blessings and thanks to this church, as well as to the warm showers hosts and all who have thus far given so easily of their hospitality.

Kirbyville is dry!  So, no beer tonight, then.

I now know that the beautiful, vivid red coloured bird I've seen a couple of times is a cardinal.  I've also seen many turkey buzzards (a kind of vulture) huddled around their carrion.  Dogs are a bit of a nuisance, running after and up to and around our bikes.  But, as someone I used to know frequently said, 'barking dogs don't bite' and so I try to maintain my composure and continue on my way. I still have my dog deterrent  (a pink plastic fly swat) to hand in my basket, but have not yet needed to resort to it!

Tomorrow, after a month in Texas, we cross over to Louisiana.

Incidentally,  I put a few more people photos up at the end of the El Paso to Austin leg.

Well, it happened again!  Yesterday, Nicole and arrived in Deridder and were put up once more by a church in a motel.  This time it was Grace non-denominational church.  The lovely woman who arranged it on behalf of the church also gave us money for a meal in the evening!  Having ridden a particularly hard, painfully cold day, this was a truly welcome act of charity.

Yesterday, we had rather a peculiar encounter with a local.  Nicole and I took shelter in an old barn, out of the wind, to eat some sandwiches, when we saw a chap from the nearby house coming towards us in his pyjama bottoms and flannel shirt, cocking a rifle and flaunting a revolver!!  Nicole went forward to greet him with a manic grin, which seemed to disarm his fear that we were about to steal away with his boat and he left us to finish our snack and to allow us to live another day.  :-)

Today was sunny and, consequently, warmer

And tonight, in Oberlin, we are sleeping in the Volunteer Fire Department building:  cosy, warm room, hot showers, internet, kitchen, The Weather Channel (and House).

Another night in another fire department, a night in the home of the friend of a friend of someone I met in the hostel in Austin, a night in the plantation home of the owner of the restaurant recommended by the previous night's host, two nights with a warm showers host in New Orleans, then transfer to another warm showers in the same city, before heading off on the Amtrak train to Memphis to visit yes! yes! yes! .....  Graceland!  :-)  Yo!

The terrain has been flat and we have been cycling past large open pastures and agricultural land and flooded fields for growing rice.  Some of the paddy fields contain crawfish, which feed off the rice and then are gathered up into nets to be sold to local outlets.  We pass numerous restaurants offering crawfish dishes.

The weather has warmed up noticeably.  I have now finally removed my thermals from under my trousers and was even one day able to take off my long socks.  Still wearing my shoes, though;  the longest period on my whole trip.  And my woolly hat has been left in my pannier.   And no rain, at least not when cycling.  Although we had some on the last 2 of our 4 rest days.  So,  temperatures looking up, then.

I've mentioned the accommodation and so thanks to our hosts:  Opelousa Fire Department, Bill, Bob and Mary Ellen, James and Joanna, Raymond and Chris, Amelia.

I had debated whether or not to bypass New Orleans (it's easy to be persuaded, if you're not careful!), but very glad that I didn't.  On the whole there is a good feel to the place - and some great street performers.  I even bought a CD of one lot called Shoeshine Fine - a fun jazz band, complete with a couple doing really smooooth jazz dancing.

Amtrak has an extremely poor reputation for time-keeping.  Hours' delays can be caused by freight trains taking precedence on the tracks!  Therefore, a little bit of trepidation, as my arrival time into Memphis was already late enough at 10pm.  It was therefore a delightful surprise to arrive 15 minutes early, both there and back.

The hotel had promised to be pretty good, being on Elvis Presley Boulevard, within walking distance of Graceland and only a cheap taxi ride away from the train station.  Well, it wasn't quite what the internet had promised:  the room was more expensive than had been quoted;  the first taxi driver had great delight in laughing to all and sundry that I thought I could get a ride for such a ridiculous price;  the first non-smoking room smelt of smoke; the heater in the second one blew out cool air and there was not enough bedding to keep me warm in the night;  there was no pavement on which to walk to Graceland.  And my card didn't work to pay the hotel.  By the time everything was sorted on the first night I was a little fraught.  It was supposed to have been a fun little side trip and it was starting off anything but fun.  However, the manager ended up saying he would give me a lift to Graceland (although I ended up walking because he wasn't around at the time - but I appreciated the offer) and back to the train station two days later;  he bought a blanket for me for the second night.

And now - Graceland.  Yep, well worth the side trip.  The house was smaller than I had thought it might have been.  A cosy size, which I liked.  It was very interesting to see it all, including he trophy room, the biliard room, the jungle room.  Only the downstairs was on view;  Elvis had kept his upstairs private when alive and so it remains private after his death.  He had included a meditation area in his garden, (which is now a memorial garden to him), which I thought was an unusual thing to have and I think speaks well of him.  Besides the visit to his home, there were his two aeroplanes; his collection of cars, motor bikes, variously-designed golf cars for racing in the grounds;  an exhibition of his time in the army; another of his 1968 comeback performance.  I needed a new pair of socks and so I have bought myself a tasteful pair of little white socks with Elvis scrawled all over in pale pink;  also, a small guitar-shaped tin containing chocolate-flavoured peppermints.  :-)

And now back in New Orleans, I went to a pot luck supper with Amelia and Nicole, at which people were in the throes of making their Mardi Gras costumes from red beans and white rice.  For - it is now the season of parades and processions, leading up to Fat Tuesday that is Mardi Gras (the day before Ash Wednesday), known in UK as Shrove Tuesday or Pancake Day.   Oh, and I made a King Cake the other day - which is to do with Epiphany and Jesus and the visit of the Kings, as well as tied up with the colours of Mardi Gras:  purple (justice), green (faith), yellow (power). 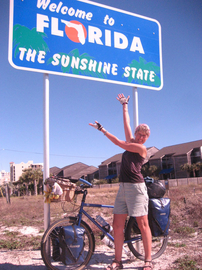 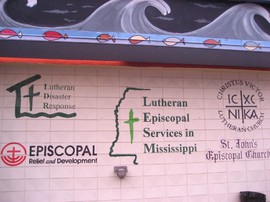 Alaska to Florida!  Six months!  It seemed to be taking for ever to go through all the states before arriving here in Florida.  And so it was only really a couple of days' ago that I suddenly realised, hey, I'm going to be arriving in my last state in the USA very soon, like, day after next!  And suddenly I became very excited. Wow, as my elder brother exclaimed, you've done it.  And I know it's not quite the end of my trip;  but spending a quarter of it in one country is quite a big deal.

Nicole and I arrived over the border from Alabama, having had just one night in this state, after crossing over from Mississippi, where we spent just 2 nights - I was a month going through Texas!  It was sunny and warm, just as one would expect Florida to be.  Why heck, that's what's been keeping us going through all that bitter cold weather just a week or so ago!

On the previous day, we had met a couple of young cyclists, Adelaide and Lydia, who have been on the road for just 3 weeks, making their way up to Alaska, biking for books to raise money for a charity, Room to Read.  Good for them.

One town we stayed in, Bay St Louis, Nicole and I were given accommodation and food in a church centre that is working with the aftermath of hurricane Katrina.  Mission on the Bay, run by the organisation, Lutheran Episcopal Services to Mississippi, primarily helps in the re-building of houses devastated by the storm.  The work they do is tremendous, staffed by volunteers, 30,000 of whom have donated their services in the last 4 and a half years.  We offered our services for a day, which we spent painting.  The following night we stayed at a sister centre, Camp Victor, in Ocean Springs.  At both places we met such fantastic people giving so freely of their time and resources.  It was very humbling.

I have put up 3 new batches of photos, including the long overdue Israeli ones.  (I didn't write a journal entry for this, having had to wait until I was clear of the Middle East before mentioning I had been there - and then overlooking the fact that I'd omitted to describe any of my time there.  I shall write something at some point.  :-)