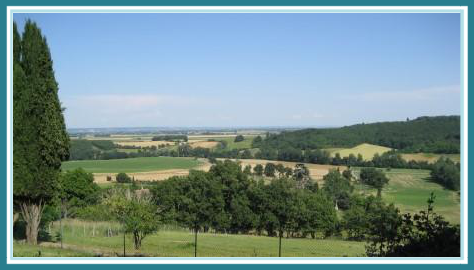 I am currently luxuriating in the most restful and relaxing break since the start of my trip, staying at friends' house in rural France, which has the most idyllic pastoral panorama.

I realise I am surprisingly tired;  I also have a bit of a swollen, strained right foot and a weakish, numbish right hand.  So, this rest is perfect timing.  Huge thanks to my host, Didier, and to the welcoming and sociable neighbours. 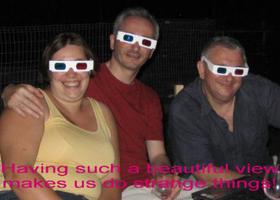 I have taken the opportunity to sort out my baggage (it is all extremely heavy), sending cold weather clothes on to my father in Cyprus, throwing some things away, leaving maps and books here to return to Almondsbury at some time in the future.

Being on my own again has been a bit strange, to say the least, after 2 weeks of constant company with my cycling companion.  I have continued to stay in refuges, which I really enjoy;  I shall do this for as much as I can.  There is a pilgrim route as far as Rome, along which are various refuges.  Goody.  I shall do some camping as well;  I have to admit, I've not yet taken on the mindset of returning to the tent, but I know I shall have to before long.

At a  place in Lescar (just before Pau), I had 2 Germans and 2 Frenchmen listening to my front wheel, all eventually coming to the conclusion, that the noise I have been experiencing for the last 2 weeks was coming from the inside of the hub on the front wheel.  Yikes, doesn't sound too good, eh?  The woman in the Office du Tourisme was great and phoned a local bike shop who said they would be able to fix it the following morning (without even knowing the problem), as they were used to pilgrims coming along with their bikes.  True enough, the following morning, Benoit (lovely smiley chap - so many of them about!) repaired my bike, gave me un cadeau de la maison of the blue tape I was about to buy and got me to follow him on his bike to show me where I needed to go next. :-)   :-)    Doesn't it just make you want to hug everyone, when you meet so many fabulous people?!

Tomorrow, I go to Toulouse, joining the Canal du Midi to go down to Narbonne, thence along the Mediterranean coast. 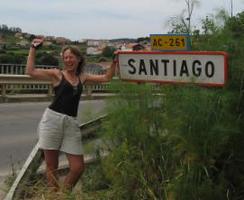 We arrived yesterday afernoon;  my 40th day since leaving home on 6 May.  How apt is that? (That is to say, from a biblical point of view: the Israelites wandered around the desert for 40 years; it rained for 40 days and 40 nights for Noah; Jesus was in the desert being tempted by the devil for 40 days!)

Today, the first visit was to the pilgrim office;  I am now the proud owner of a Santiago certficate.  We then went to the cathedral for the pilgrim mass at midday.

I feel a real sense of accomplishment by arriving here in Santiago.  Reflecting on the whole journey to date, the thing I am slowly learning is that people and events come into my life at the right time.  For instance, I had no detailed map of the route; and happened to team up with someone who had, which has made the route so interesting and enjoyable.  The route is the Dutch St Jacob Camino, which has taken us along really quiet roads for the most part.  One day we travelled 10 miles (16 kilometres) of the actual camino along a gravel track - an experience! - the next day, 2 miles along another gravel road - an ordeal.

Yesterday, we had the smell of eucalyptus in our nostrils for the most part, as we travelled through hectares of eucalyptus forests.  We have had grindingly slow uphills and then free-wheeling, wind-in-your-hair downhills (one for 12 kilometres) and even after that another 11 with easy uphills.

The refugios have varied hugely:  Pamplona being the biggest we stayed in with over 100 people; to La Bouhere, wth just 3.  Whatever the size, it takes only one snorer to make it difficult to sleep.

Tomorrow night, I take the an overnight bus to Bilbao, changing to reach Irun at midday on Tuesday, followed by a 65 kilometre (40 mile) ride to St Palai, to pick up my campng and other stuff adn then to continue on my own again;  strange, after 2 weeks with a constant companion.  Antoon will go on to Cap Finisterre, and then, well, he´s not yet decided.  A cycling couple from Holland, Hans and Jolanda, who we have met a few times on the way, are supporting an Altzheimer´s charity in Holland.

So, best wishes to you all.  And to anyone contemplating the Camino:  yes, yes, yes, do it!  Cycling or walking:  a wonderful experience.  :-)

Having a great time; wish you were here.

It is now 10 days since leaving St Jean Pied de Port.  The anticipated difficult ascent to Roncesvalles never materialised!  It was a steady 21 kilometre climb to the top; all cyclable, albeit slow. :-)

I met a few people at the top who I had met previously on the chemin;  plus a few new people.  It was great.  The top was at a height of 1027 metres.  Since then I have worn socks with my sandals,as each day has been over 900 metres.

I have also beeñ riding with a Dutch guy, Antoon, since then and it has been great.  I never thought I would be able to say this, but it has been a joy to ride with someone else:  we cycle well together and  I´ve really enjoyed the company.

The scenery has been wonderful:  the verges particularly are just beautiful:  full of different flowers: red poppies, yellow something or others, mauve, purple, white, bright cornflower blue, pink (it´s obvious I don´t know what the flowers are, but the effect is so lovely.  If ever you travel the camino then do it at this time of year. 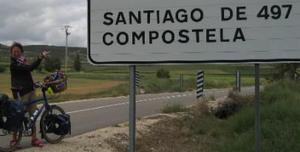 Today was also a challenging day: climbing 900 metres in 21 kilometres, then 1000 metres descent in about 2 hours.  There was a 12% (1 in 8?) ascent, which I managed to cycle, using my lowest gear for the first time.  It was a great feeling.

Weather for the last 9 days has been cold, windy, some wet, with sunny intervals.  Now that we have descended to 500 metres, it looks like I can leave off my socks and wear shorts again.

Getting there!  Not much further.

Travelling the Camino has been a real experience: of meeting new people, of staying in such a variety of accommodation, of travelling with a regular companion, of having some time to reflect on life, relationships and the spiritual side of things. I have also become slightly fitter and slender.  :-)

I really am having a great time;  and wish you were here.  Cheers.  Astrid xx With love.